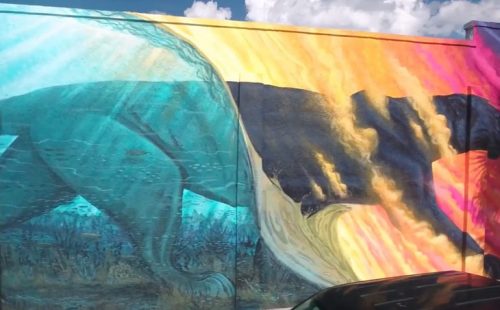 When we are asked to get involved in an unusual video project such as the Florida Institute of Technology Mural project, it’s these outside-the-box projects that keep us invigorated here at Tight Line Productions. The FIT mural project in downtown Melbourne was once such instance.

As a past President of the Melbourne Main Street Board of Directors, Tight Line’s Founder and CEO, Mark Lewis took a personal interest in producing this showcase video.

“This project got me out from behind my desk and on the street as a Director again,” said Lewis. “It keeps me sharp and on my game.”

The time lapse footage featured in this video posed challenges as it required multiple cameras to be mounted for over a month as the painting progressed to capture the entire creative process of artist Chris Maslow. Tight Line accomplished this using some “creative carpentry” to disguise the presence of the cameras. Drone footage was woven into the presentation as well which gives the mural perspective in its location at the corner of New Haven and Waverly Place.

Tight Line Productions salutes the collaborative efforts of Florida Institute of Technology, Melbourne Main Street, the City of Melbourne and artist Chris Maslow for their visionary beautification of downtown Melbourne in a way that celebrates what makes our area unique and special.

Latest posts by tlp-seo (see all)

Let's Chat!
Fill out the form and a representative will get back with you within 24 hours.
Send Message
We never share your details.
×